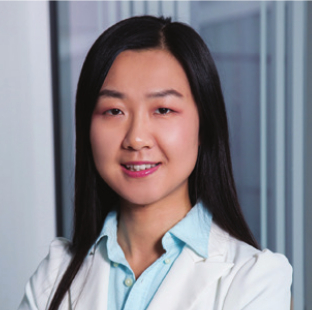 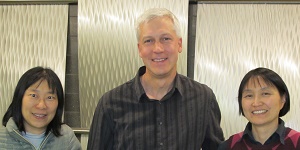 Professor Bing Wang is the lead principal investigator on a new $1 million grant from the National Institute of Mental Health and Department of Health and Human Services to develop a system that can help provide personalized treatment data for people suffering from depression and that is informed by innovative technology. The co-PI’s on the project are Jinbo Bi, professor and associate head, Alexander Russell, professor of computer science and mathematics, and Jayesh Kamath, associate professor of psychiatry at UConn Health.

According to the article in UConn Today, the system the researchers will develop, DepWatch, will use mobile health technologies and machine learning to provide clinicians with objective, timely, and accurate assessments of depression symptoms. These assessments will help inform clinicians’ decisions by providing them with more data about how patients are reacting to their current treatment regimes.

DepWatch collects data from smartphones and wristbands without any user interaction. The system will also allow users to input ecological momentary assessments (EMAs). EMAs involve users entering data about their symptoms and experiences as they happen. This eliminates possible problems with clinicians having to rely on patients’ ability to remember how they were feeling at a particular moment weeks later at a checkup appointment. DepWatch can also track medication adherence and safety information.

All this information will be fed into machine learning models that will develop a weekly assessment of patient symptoms and predict their responses to treatment over time. Clinicians can then use this data to make better-informed decisions about what kind of treatment will work best for their patients.

In this talk I will cover some real-world applications of Evolutionary Computation (EC). My talk will mainly include two main projects that I am working on for the past few years:

1-  I will talk about using EC for analysing the Saudi Arabian labor market and automatically generate public policies. Genetic Programming is used as multi-objective optimisation engine to detect irregularities in the labor market and generate policies that maximise the governmental objectives. In addition, we used Agent based modelling to simulate jobs seekers and jobs owners negotiation process based on Nash theory of equilibrium.

2- I will talk about extracting EEG signals from two human brains to collaboratively perform a joint task.

Finally, I will share my experience about a successful growing startup company that I have started called EvoSys where our team using EC as commercial tools to solve real-world problems for end users.

A wireless human motion monitoring system: from mechatronics to rehabilitation

Our society is witnessing an unprecedent, enduring, and pervasive aging process. Aging not only contributes to integrative challenges to memory, balance, and mobility for healthy subjects, but also leads to degenerative conditions of the musculoskeletal system and the nervous system. With more people requiring walking assistance, the demand for gait physical therapy and rehabilitation has increased rapidly over the years.

Current gait rehabilitative therapy is provided by physical therapists who stimulate patients’ reflexes as well as use manual techniques to facilitate their walking. Moreover, the current assessment of the gait impairments is based on the visual observation of therapists, video analysis, physical tests, as well as self reports from patients. Therefore, current gait evaluation is quite subjective and it puts really strict requirements on physical therapists, who are already in short supply.

As the first step to build the next-generation gait rehabilitation system, a wireless human motion capture system is introduced for performing real-time gait analysis and providing visual feedback to therapists and patients during rehabilitation training. The system includes a pair of smart shoes, several inertial sensors, and a user interface. The smart shoes are employed to measure ground reaction forces and detect gait phases, and inertial sensors are used to estimate joint rotations, step lengths, and gait speeds. User interfaces are developed on a laptop as well as an iPad.

Experimental data have been collected from healthy subjects and patients with neurological impairments. A clinical test has been conducted with 24 stroke and Parkinson’s disease patients to examine the performance of the system and evaluate the possibility of in-home rehabilitation. Progress of patients in the control group (with traditional rehabilitation only) and experimental group (with traditional rehabilitation and visual feedback) is discussed based on statistical data analysis. As concluding remarks, achievements and limitations of the clinical study are summarized.

Bio: Wenlong Zhang received the B.Eng. degree (Hons.) in control science and engineering from Harbin Institute of Technology, China, in 2010, and the M.S. degree in mechanical engineering and the M.A. degree in statistics from the University of California at Berkeley (UC Berkeley) in 2012 and 2013, respectively, where he is currently working toward the Ph.D. degree in mechanical engineering. His research interests include gait analysis and rehabilitation, real-time and human-involved cyber-physical systems, and statistical data analysis. Mr. Zhang received the Best Paper Award at the IEEE Real-time System Symposium in 2013 and was among the Semi-plenary Paper Award Finalists at the ASME Dynamic Systems and Control Conference in 2012. He also received the Berkeley Fellowship for Graduate Study at UC Berkeley from 2010 to 2015. 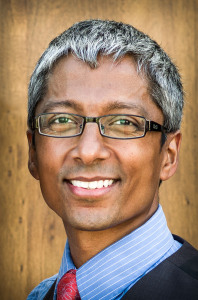 In the past 25 years, origami has seen a tremendous explosion, in the arts, the sciences, and in technology.  The mathematical theory of origami, in many ways, is at its infancy.  There is a simple relationship between origami folds and geometric trees, obtained simply by looking at the crease lines of a piece of folded polygonal paper.  In genetics, such trees play an important role in capturing the evolutionary process of species.  We try to show a natural map between these worlds, of spaces of polygons and spaces of metric trees, and ask some foundational questions about this map.  The heavy lifting of our work is done by an analogous version of a beautiful rigidity result of Cauchy from 1813.

The 24th Fall Workshop on Computational Geometry will be held at UConn on Oct 31 – Nov 1, 2014. CSE Faculty Don Sheehy and Tom Peters are on the program committee with Sheehy chairing the committee. The event will bring researcher in computational geometry and related fields from all over the world.

Following the tradition of the previous Fall Workshops on Computational Geometry, the format of the workshop will be informal, extending over 2 days, with several breaks scheduled for discussions. The workshop is open to the public, with no registration fee. There will be an Open Problem Session where participants are encouraged to pose and present research questions.

Selecting Data for Experiments: Past, Present and Future

October 31, 2014 at 11am at the Dodd Research Center Auditorium (Storrs Campus) 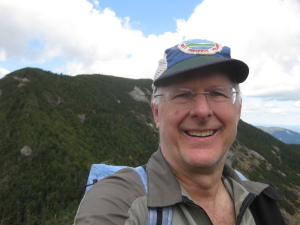 This talk describes three different kinds of data that algorithm designers use to test their implementations.  Selecting input data for past problems typically involves scholarship to assemble existing data and ingenuity to model it efficiently.  Selecting data for present problems should be based on active discussions with users and careful study of existing data.  Selecting data to model problems that may arise in the future is the most interesting and delicate of the tasks that we will consider.  (This talk supplements an invited paper in the 2014 Symposium on Experimental Algorithms; it expands some of the stories in that paper, and tells one new story.)

Jon Bentley’s research interests include programming techniques, algorithm design, and the design of software tools and interfaces.  He has written over a hundred articles on a variety of topics, ranging from the theory of algorithms to software engineering.  His books include Writing Efficient Programs (1982) and Programming Pearls (2nd Edition 2000).  He received a B.S. from Stanford in 1974 and an M.S. and Ph.D. from the University of North Carolina in 1976, then taught Computer Science at Carnegie Mellon for six years.  He joined Bell Labs Research in 1982, and retired in 2001 to join Avaya Labs Research, from which he retired in 2013. He has been a visiting faculty member at West Point and Princeton, and has been a member of teams that have shipped software tools, telephone switches, telephones and web services.  He received the Dr. Dobb’s Excellence in Programming Award in 2000. 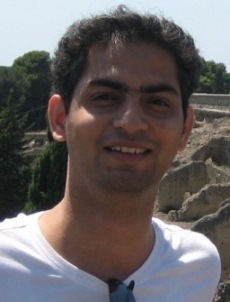 In deterministic public-key encryption (D-PKE), the encryption function is deterministic so that there is a unique ciphertext for every plaintext. This property makes D-PKE attractive to several applications, particularly those where binary search over encrypted data is critical. However, it also means that meaningful security can only be guaranteed for high entropy plaintext distributions.

One way to ensure high entropy is to encrypt relatively long messages in practice. This can create a significant efficiency bottleneck if the data undergoes several small but frequent changes. An example would be a large document stored at a remote location which is constantly “synchronized” with a local, frequently changing, copy. Existing D-PKE schemes are unsuitable for such applications since they usually require the entire ciphertext to be recomputed even if one bit changes in the plaintext.

In this talk, I will discuss my work on incremental D-PKE schemes: these schemes offer a tradeoff between the security and the number of bits that change in the ciphertext when there are small changes to the plaintext. I will discuss what tradeoffs are actually possible in such settings without losing security, and then present new D-PKE schemes which achieve almost optimal tradeoffs.

Towards the end, I will briefly discuss one of my recent results in this area which aims to strengthen D-PKE against partial exposure of the decryption keys. Such exposure can occur due to a variety of reasons including insider attacks, software vulnerabilities, or other hardware-based attacks. Our new D-PKE schemes provide an early algorithmic defense against such attacks, which can be crucial when dealing with high business impact data.

Bio:
Dr. Omkant Pandey is a postdoctoral research associate at the University of Illinois at Urbana Champaign (UIUC). His research interests are in cryptography, security, and privacy. He has published several articles at conferences such as CRYPTO, EUROCRYPT, and ACM CCS. Dr. Pandey received his Ph.D. in 2010 and worked as a cryptographer for Microsoft for two years. He was also a postdoctoral fellow at the University of Texas at Austin. This fall, Dr. Pandey is visiting the NSF Center for Encrypted Functionalities at UCLA. 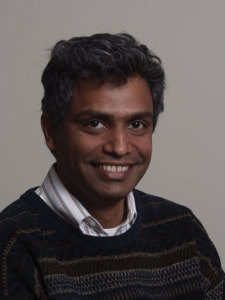 Abstract: Endowing  an automated agent with  the ability to “plan” — i.e., convert its high-level goals into an executable course of action — has been a long-standing quest in Artificial Intelligence.  For much of the history of automated planning, the dominant research theme has been efficient synthesis of plans under increasingly expressive system dynamics (classical, temporal, stochastic etc.).

An implicit assumption underlying  this research has been that the planner’s responsibilities start with taking a complete specification, and end with giving out a complete course of action. This assumption is no longer valid when humans are part of the decision making loop, as is the case in an increasing number of decision support and human-machine teaming scenarios.

In this talk I will identify the research challenges in human-in-the-loop planning, including the need to interpret the goals/intentions of the humans in the loop, the need to support continual planning and replanning, the need to unobtrusively support team-decision making, and above all the need to do handle pervasive incompleteness in the domain models as well as problem specification.  I will then describe some of our ongoing work in handling these challenges in the context of human-robot teaming and crowd-sourced planning.

Short Bio: Dr. Subbarao Kambhampati is a professor of Computer Science at Arizona State University, where he leads the Yochan research group focusing on the challenges in  automated planning and decision support, as well as information integration from structured and unstructured data sources.  He is a 1994 NSF Young Investigator, a 2004 IBM faculty fellow and thrice received Google Research Awards. He was elected fellow of AAAI (in 2004) for his contributions to automated planning. He received the 2002 college of engineering teaching excellence award, 2011 university last lecture invitation, and 2012 departmental best teacher award. Kambhampati was the co-chair of AAAI 2005, and will be the program chair of IJCAI 2016. He is an elected Trustee of IJCAI, and the president-elect of AAAI.