Computer Science & Engineering (CSE) Associate Professor Ion Mandoiu is a co-principal investigator with Dr. Pramod Srivastava, director of the Carole and Ray Neag Comprehensive Cancer Center at UConn Health, on a study leading to the development of a new approach to treating cancer by harnessing the power of the patient’s own immune system. The results of their four year investigation appear online in the September 22 issue of the Journal of Experimental Medicine. Several other collaborators are involved in the research, including CSE Assistant Professor Sahar Al Seesi and CSE Ph.D. alumnus Jorge Duitama, both of whom are co-first authors on the study along with Fei Duan, a post-doctoral scholar from UConn Health.  CSE Ph.D. student Anas Al-Okaily has also contributed to the research study.

According to Science Daily, as cancer cells divide, they accumulate random DNA mutations (structural changes of a gene), some of which create mutated versions of proteins. When mutant protein fragments are recognized as foreign invaders by immune cells called T cells, this prompts them to attack and eliminate cancer cells. “With recent advances in sequencing technology and bioinformatics algorithms, it is now possible to identify within days all mutations in a patient’s tumor and to predict which mutations will result in new T cell targets” says Dr. Mandoiu.  Some of these targets (called “neoepitopes”) can then be used as personalized vaccines to elicit a protective T cell response that destroys the cancer.  In their study, UConn researchers have shown that a previously used measure, namely the strength of the interaction between mutated protein fragments and a set of molecules called the major histocompatibility complex, which are involved in presenting such fragments on the surface of the cells, is a poor predictor for the effectiveness of the T cell response. They have developed a better measure based on how different mutated protein fragments look to the T cell when compared to their normal counterparts—the more distinct, the better.

As referenced in UConn Today, clinical trials of this personalized immunotherapy will begin at UConn Health this fall, where the research team will sequence DNA from the tumors of 15 to 20 women with ovarian cancer. The goal is to develop a safe and effective cancer vaccine specifically designed for each patient. This research has the potential to dramatically change how we treat cancer in the years to come. 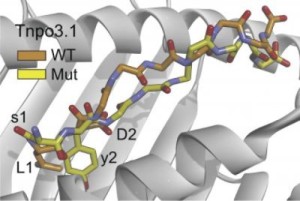