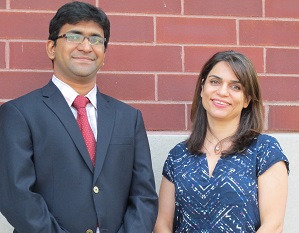 The Computer Science & Engineering Department is pleased to announce the addition of two new faculty members for the fall of 2015 academic term. Their substantial academic credentials and experience will strengthen our competitive program.

Sheida Nabavi received her Ph.D. in December 2008 from the Electrical and Computer Engineering Department at Carnegie Mellon University, where she continued as a postdoctoral researcher for a subsequent year. She was a Research Fellow (2010-2013) and Research Associate (2013-2015) in the Center for Biomedical Informatics at Harvard Medical School, where she received an NIH Pathway to Independence Award in 2013.

Parasara Sridhar Duggirala works in an interdisciplinary area of verification of Cyber-Physical Systems. He brings together techniques from Formal Methods, Control Theory, Numerical Analysis, and Distributed Systems for designing and analyzing safety-critical systems such as aircraft landing protocols and autonomous vehicles. He received his Ph.D. from University of Illinois at Urbana Champaign in 2015.