CSE’s newest faculty member gives a glimpse into her journey, research, and what lies ahead 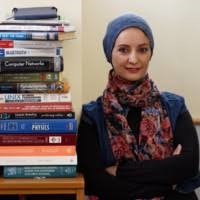 Although she has only been at the university for a few weeks, assistant professor Ghada Almashaqbeh is quickly making a name for herself. Set to give her first talk as a UConn professor at this year’s virtual Grace Hopper Celebration in early October, this newcomer already has the real-world experience backing her research. Reflecting on her journey, Ghada shares what led her to computer science and her decision to leave industry for academia.

Ghada’s childhood in Jordan was typical of the time. It wasn’t until computers started popping up in the late 1990’s that she began exploring the idea of a career in engineering. “Most women studied medicine or went into teaching. Going to engineering school was not widely accepted by society.” In 2005, Ghada was one of only a dozen women to receive an undergrad degree in Electrical and Computer Engineering from The Hashemite University.

Still intrigued by computers, she was first introduced to cryptography after earning her masters degree in Computer Engineering. She then came to the United States to pursue her Ph.D. in Computer Science at Columbia University. “I was surprised to get to Columbia and see so few women in my program. Women in the U.S. have more freedom in their career choice, but some of the same stereotypes exist.”

It was her thesis at Columbia that would lay the groundwork for her subsequent career move. As she talked about her research, people began encouraging her to take it to the next level.  “Startups were spreading,” says Ghada. “With the success of Bitcoin, people were more willing to put money down.” Together with her co-advisor and another engineer, Ghada cofounded CacheCash, a distributed content delivery service powered by a cryptocurrency, based on the concepts outlined in her PhD thesis titled, “CacheCash: A Cryptocurrency-based Decentralized Content Delivery Network.”

While the experience as an entrepreneur working with industry was invaluable, Ghada felt a pull to return to academics and research. After a year and a half with CacheCash, she decided to pursue teaching at the university level.

She first met UConn professors Amir Herzberg and Bing Wang at the2019 IEEE Conference on Communications and Network Security in Washington, DC. “Then UConn just kept popping up,” Ghada says. “I interviewed at other schools, but none felt like a good fit. It is different when you feel like the department is a family.”

Ghada is quickly settling into her new role as assistant professor in the Computer Science & Engineering department. Her research in security, privacy and cryptography – in particular, building decentralized blockchain and cryptocurrency-based services and securing them through cryptographic and economic means – caught the eyes of professors Laurent Michel and Ben Fuller, who are mentoring her through the Connecticut Advanced Computing Center. “I get excited when my research is useful,” she says. I want to solve problems, not just publish papers. It starts with the real world.”

Her talk at this year’s virtual Grace Hopper Celebration titled “Rethinking Systems: A Path Towards Secure Equitable Resource Markets”, is just one more feather in her cap. Speaking alongside dozens of the most influential women in the technology field, Ghada has not only established herself as a researcher, but also as a role model for women pursuing a career in engineering.

What’s next for Ghada? “You know when you are a kid and your parents do everything for you and you can’t wait to get out on your own?” she asks. “That’s how I feel now. I’m ready to decide how to run my projects, find my own students and be a successful advisor so I can get the best out of them like my advisors did for me. A successful student is the culmination of all the work I put in to get here.”

To read more about Ghada’s research, visit her website.